I love getting together with friends and creating.  Usually, I have an idea and I rope my friends into helping me, lol.  In this case my childhood dance buddy Trisha reached out to me to see if I’d be interested in collaborating with her and her husband’s photography/videography business and style a Valentine’s photo shoot.  Visit their website here and visit their instagram page @juiceboxmedia for a chance to win a free photoshoot!  I had no idea what that really entailed, but I was on board.  I asked for some direction and Trisha sent me a few images from Pinterest….just search “valentines photoshoot” and you’ll see tons of images.  That was my jumping off point. I had no idea what I was going to do…until…these pallets found their way to me.  We were receiving a shipment at work and the delivery guy let me keep the pallets, and even gave me the ones on the truck too!  Free materials are the best!

I wasn’t sure what these had to do with Valentine’s Day but I was going to make them work for me!  I have the tendency to make a job harder than it has to be…I love a challenge.  I’d always wanted to make a vertical garden out of pallets for my backyard so I used this project as motivation to build a wall that I could later transform into a garden.  The transformation from this project to that will be in a later post, I’m sure.  So…pallet wall…a bit rustic for Valentine’s, but it was going to work, I just knew it.  With the right embellishments, you can make raw wood pretty charming, that was the idea at least.

I used a Sawzall (thank you google search for the recommendation).  I had first tried using a chisel to separate the wood and pull out the nails…WAY too hard.  The Sawzall just sliced right through the nails.

Step Two:  Laying out the planks

I used 6 foot fir strips (aka cheap/lightweight wood) to attach the planks to. I made two separate walls for the sake of transportation ease.  I laid out a pattern with variations of light and dark and made sure the widths of the planks were similar to those of the second wall so there would be a smooth transition from one wall to the other.  I used wood screws to attach the planks to the fir strips.

Here’s a closeup of the wood color and condition

Step Three: Embellishing the wall to make it more Valentiney

I cut out hundreds of hearts in pinks, reds, and gold and strung them on fishing line.  Remember when I mentioned how I rope my friends into helping me?  Yup, I got some major help on this task.  The LOVE marquee is from Target. 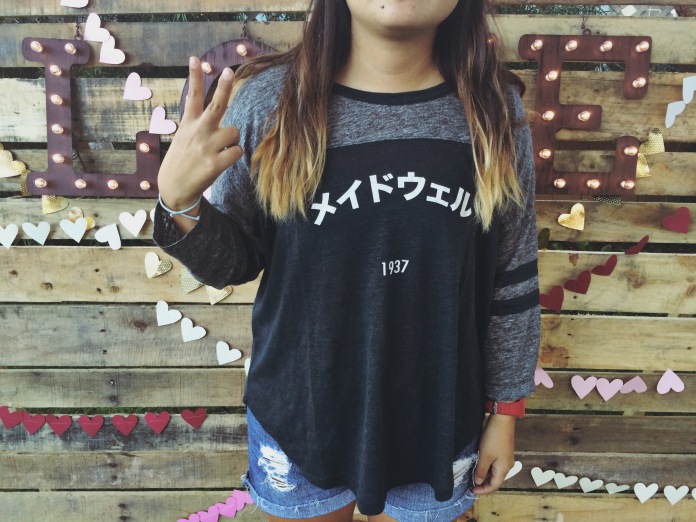 After the walls were finished I still had some wood left so I decided to make a kissing booth as well.  I wanted to incorporate the chalk typography art fad so I gave it a go.  The kissing booth is painted with chalkboard spray paint and I freehanded the type in chalk, that way I could change up the text if need be in the future.   I made the tissue tassels by following this tutorial.